Our culinary expectations before coming to Japan were rocket high. We had always been great fans of its export hits like sushi, ramen or tempura and imagined that it could only get better at the source. Yet, the reality was not quite as rosy… 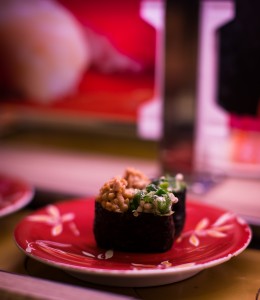 We spent our first month in Tokyo in a miniscule apartment, with an almost nonexistent kitchen. While Meguro area is full of cheap eateries, most of the places specialise in one particular type of food (ramen, sushi, curry, tempura, okonomyaki), and we found it difficult to satisfy the preferences of all our family members (our elder son being a devoted carnivore, myself not eating meat and the little one not yet being able to eat raw fish). We could also not help the impression that form (most dishes indeed look like tiny pieces of art) prevails over substance. Restaurant portions were too small for our stomachs (it was not unusual for us to devour a stack of sandwiches back home after a restaurant dinner). Plus – with the notable exception of ramen – much of the food felt quite bland to our barbarian palates and/or slightly disquieting. What we took for grated radish, at a closer inspection turned out to have little eyes… The fish dish on the menu proved to be an enormous yellowtail head (with eyes). Even sushi (slimy prawns, smelly sea urchin, rubbery octopus) looked somehow more daunting than in Europe.

Once in our final apartment, I hoped to make use of the kitchen again. But grocery shopping proved no piece of cake either! The posh National Azabu, targeted at the neighborhood’s expats, offers anything from cottage cheese to celery root but the prices are several times higher than in Europe. There’s also a cheap wholesale Hanamasa just round the corner, but here most of the products are sold in huge packs and only few of them resemble anything edible. Our inability to read in Kanji (one of three Japanese alphabets based on Chinese characters) led to one culinary flop after another. Eggs added to pancake batter turned out to be boiled, red beans added to salade niçoise were syrup-sweet, and grilled salmon came out so salty it was almost uneatable. 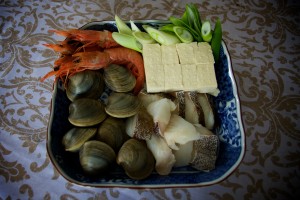 Things change when I come across Miyuki Suyari, who’d grown up in the US and having lived all over the world decided to introduce foreigners to the secrets of Japanese cuisine. Together with a French and an Italian friend, I signed up for her intensive course, consisting of five 3-hour lessons. We started off with a supermarket tour, where Miyuki acquainted us with Japanese staples such as different types of soy sauce, sake, rice vinegar, miso paste etc. She also enlightened us on how to tell fresh fish from pre-salted one, full milk from skimmed (nothing to do with the carton colour) or pre-rinsed rice from the regular type. 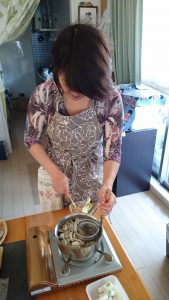 Each of the courses has one star ingredient, which can be used as a basis for many dishes. For instance, dashi – a very healthy broth prepared from dried kelp seaweed (konbu) and dried bonito flakes katsuobushi – is the foundation of miso soup, salad dressings and dipping sauces for noodles. Sweet banno (literally “almighty”) sauce can be used to marinate tofu, fish or meat (e.g. teriyaki salmon) or to season vegetables (e.g. radish or spinach). Tofu – rather bland as it is – tastes fantastic when deep-fried, cooked in a nabe hotpot or turned into a salad sauce. Miso (fermented soybean paste) comes in many different varieties and can be used in countless ways, beyond just miso soup. Try spreading it over aburaage (deep-fried slices of tofu) for a quick, gluten-free pizza or over grilled eggplants for a delicious side dish, full of umami (the mysterious fifth basic taste that gives dishes their rich, deep flavour).

Miyuki’s class soon became the highlight of my week, and after the kick-start intensive course, I decided to continue with à la carte sessions (hotpots, sushi, noodles etc.). What distinguishes Miyuki’s classes from other courses given in Tokyo is their cosy atmosphere – the classes take place in her own living room and the maximum number of participants is four. Having lived outside Japan for many years, Miyuki speaks perfect English and has an interesting look on the Japanese culture, which makes her a fantastic guide on local customs and etiquette (you will find some of her insights in my recent interview with her).

The classes gave me the courage to start using local ingredients instead of their Western equivalents: shiso leaves instead of basil or parsley, bamboo shoots instead of artichokes, tofu instead of cottage cheese. This proved beneficial not only for the diversity of our diet but for our wallets too. 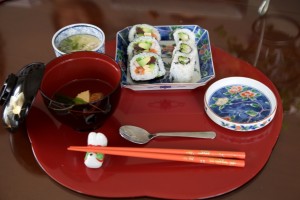 What struck me most is that preparing a Japanese meal – which typically consists of ichijū-sansai, i.e. “one soup, three sides” (plus of course a bowl rice) – does not require hours in the kitchen. Most dishes use 1-2 ingredients and the cooking time is much shorter than in Western cuisine. If only you soak you konbu in advance, preparing miso soup will take you 15 minutes (or even less if you are using instant dashi granules), nothing like the 2-hour simmering of chicken stock. Add to that a piece of grilled fish or deep-fried tofu as the main course and two quick vegetable side-dishes, and you will be done within the 45 minutes that it takes to cook the rice (especially if you skip some of the ‘non-essentials’ (such as plunging blanched vegetables in iced water or the various tricks to remove the fishy smell from the fish). 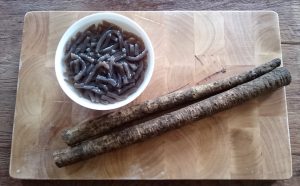 So does it taste good? Well, this is a more tricky question. Apparently, you need to try an unfamiliar taste several times to learn to like it. This holds true not only for children but for adults too. After several attempts, we gradually warm up to fishy dashi-based sauces, raw fish and fresh tofu (I can actually eat it straight from the package now). Knowing more about the ingredients (and their beneficial properties) helps to dissipate fears too. Gelatinous noodle-like strips (which we initially took for some kind of sea creatures) turn out to come from the konnyaku root – a perfect detox agent, high in fiber and calorie free. The unappealing brown sticks of gobo root (burdock) are another Japanese superfood, rich in potassium and minerals.

What attracts me most in Japanese cuisine is its ‘healthiness’ – the wide variety of simmered vegetables, seaweed and mushrooms, little use of meat, and the emphasis on freshness and seasonality. I also admire Japanese culture of moderation, epitomised in the saying hara hachi bu “eat until you are 80% full”. No wonder that Japanese enjoy the highest life expectancy in the world (87 years for women and 80 for men) even though they lead relatively stressful lives (working very long hours), smoke like chimneys (at least men) and are not the greatest fans of sport.

What I appreciate less is the extreme “minimalism” (letting the ingredients “speak for themselves”). Beyond the “golden six” (soy sauce, sake, miso, vinegar, salt and sugar) – plus occasionally ginger, shiso leaves or myoza (Japanese ginger) – Japanese cuisine uses virtually no condiments. My taste buds are still more accustomed to more intense flavours (such as those found in the Italian, Indian or Moroccan or Thai cuisines) but hopefully this is a question of time.